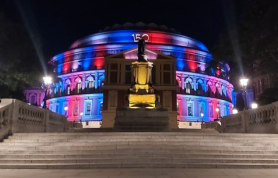 Crouch End Festival Chorus returned to the stage of the Royal Albert Hall on Friday 15 July for the first night of the 2022 BBC Proms.  The choir had previously sung at the first night in 2010 with Mahler's 'Symphony of a Thousand'.

This season saw the choir join forces with the BBC Symphony Orchestra and Chorus under the baton of their principal conductor, Sakari Oramo to perform Verdi's Requiem.

While the work is well known for its drama, the line-up of soloists for the concert added its own with billed tenor Freddie de Tommaso dropping on the week of the performance due to Covid.  Up stepped David Junghoon Kim, an alumnus of the Jette Parker Young Artist Programme to fill the tenor spot, valiantly turning up to rehearsal and launching into the solos before even having time to take his jacket off!

The performance was met with glowing reviews across the board, with The Guardian hailing: “The choral singing was unquestionably the thrilling centre of a sombre interpretation…  the choral singing superb in its precision and detail, with the choirs marvellously alert throughout to Oramo’s sense of drama and dread.”

Seen and Heard added: “The supremely drilled choruses were capable of the most magical pianissimi"

Classical Source praised the "great contribution from the combined choruses – warm, sprightly and every word crystal-clear", while theartsdesk said "the combined forces of the BBC Symphony Chorus and Crouch End Festival Chorus ran the dynamic gamut with perfect focus".

Those in charge of the choruses were Crouch End's David Temple and the BBCSC’s Neil Ferris, leading between them 260 singers.

Verdi's Requiem was the debut piece that David Temple's Crouch End Festival Chorus performed in 1984.  No recording is available for that, but you can listen to the 2022 performance on the BBCiPlayer and on BBC Sounds.

The Guardian "choral singing superb in its precision and detail"

The Times "not only decibels, but drama"

Colin'sColumn "the combined choruses impressed in weight of sound and togetherness"

Evening Standard "This requiem at the Albert Hall was a dream"

Ham & High "the sit up moments belong to the choirs"