Crouch End Festival Chorus has won praise for displaying “passion, love and vision” in its performances of the Benjamin Britten classics Saint Nicolas and A Ceremony of Carols in a new recording released on November 6 2020. 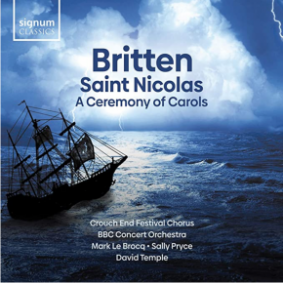 In the first review of the Signum Classics recording, from which three advance tracks were released before the full recording was made available on CD and to download, David Winskill from the Ham&High said the choir had provided a “real pick-me-up in what looks set to be a pretty bleak midwinter.”

Music Director David Temple completed the recordings with the choir and BBC Concert Orchestra at the restored Victorian theatre at London’s Alexandra Palace just days before the UK went into lockdown because of the Covid-19 virus in the middle of March 2020. It is being released as the country enters another period of winter lockdown.

“There is so much passion and love in these performances, underpinned by a clear vision of how the works should sound,” Winskill wrote.

“Not only does the CD showcase one of England’s greatest 20th century composers, but it offers a delightful and perhaps appropriately contemplative alternative to the usual blaring Christmas fare.”

“Britten wrote Saint Nicolas as a community project for amateur musicians and I wanted to recreate and celebrate the feeling of that community for this recording, “ Temple said.

“We’ve used local schoolchildren and community singers alongside Crouch End Festival Chorus. And with the superb singing of Mark Le Brocq and the wonderful playing of the BBC Concert Orchestra, this recording aims to give a new freshness to this well-loved work. That energy was also key to our recording of A Ceremony of Carols.”

The ever-popular A Ceremony of Carols is performed with harpist Sally Pryce, and was recorded at East Finchley’s All Saint’s Church. Winskill described the recording as “glorious”.

“The opening Procession is breathtakingly beautiful in its plainchant simplicity,  contrasting with the jaunty Wolcum Yole and the perky harp playing of Sally Pryce,“ Winskill wrote.

“My favourite is That Yonge Child, the solo provided by the lovely voice of Caroline Milton.”

The album is available to buy from the Crouch End Festival Chorus Music Shop, and from all other music stores.

A track from St Nicolas was played on release day on BBC Radio 3's In Tune programme, where presenter Katie Derham described it as “musically magical.”  BBC Radio 3 will showcase the St Nicolas recording in full in early December 2020.


Listen to David Temple's commentary on the St Nicolas recording from our Listening Party on the eve of the album release,

Choir that does it all