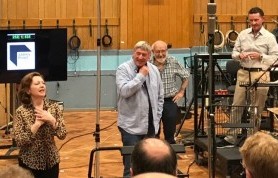 Rosner, who was born in New York City in 1945 and lived and composed there for most of his life, wrote the work at the age of 28. His sister Irene Rosner David (pictured above at Abbey Road Studios) has since been working hard to make new recordings of his compositions since his death on his 68th birthday in 2013.

Music Director David Temple and 85 singers from the choir recorded the Requiem with the London Philharmonic Orchestra under the baton of American conductor Nick Palmer at Abbey Road Studios in London in July 2019.

It was produced by Rosner’s long-term friend Walter Simmons, with Temple conducting the acapella Madrigal section of the work.

“I remember dearly how Irene was so pleased with the recording on the day,” Temple said. “I worked closely with Jonathan Allen on the mixing desk, and I’m very excited that people are now going to be able to hear and enjoy this work.”

The Requiem sets spiritual and secular texts on death from a number of the world’s cultures, including Whitman, Villon, the Tibetan Book of the Dead, a sutra from Zen Buddhism and the Jewish Kaddish.

Rosner’s musical language clothes the modal harmony and rhythm of pre-Baroque polyphony in rich Romantic colours, producing a style that is instantly recognisable and immediately appealing.

The recording is available to buy or download in our Music Shop.  You can hear some clips here via Toccata Classics.

The Crown on Netflix