Choir takes off for Rocketman soundtrack 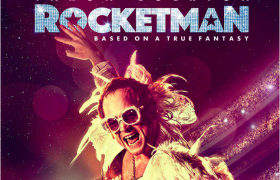 Crouch End Festival Chorus is singing in the much-anticipated Elton John biopic Rocketman which premiered at the Cannes Film Festival on Thursday 16 May.

The chorus recorded the songs and the soundtrack for the film at London’s Air Studios in January and March 2019. The movie will be released in the UK on May 24 together with a soundtrack album.

The film follows the journey of shy piano prodigy Reginald Dwight into international superstar Elton John. British actor Taron Egerton plays Sir Elton and sings all the songs in the movie and on the album.

Sir Elton is also a producer on Rocketman which is directed by Dexter Fletcher who was a pupil at Fortismere School in north London where the chorus rehearse every Friday.

“It has been a busy time for us in the recording studios in the last six months,“ said Crouch End Festival Chorus music director David Temple who conducted the recording sessions, led by composer Matthew Margeson and producer Giles Martin.

“It’s great to be involved in such a fascinating movie about Sir Elton and I know our singers are looking forward to watching the film in cinemas soon.”

The choir can be heard backing Taron Egerton in this official video for Rocketman, the first single from the album.

The choir has been involved in recording the soundtracks for 14 major films as well as music for popular TV series, including Doctor Who.

In 2018, the chorus also recorded the soundtrack for the comic fantasy TV series Good Omens which will be released by Amazon Prime at the end of May 2019.

CEFC sing with Ennio Morricone at the O2 Arena