Putting our heart and soul into Gerontius

The Queen Elizabeth Hall was the venue for Crouch End Festival Chorus' latest rendition of Elgar's The Dream of Gerontius in February. 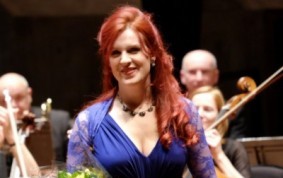 Joined by the London Mozart Players and a fantastic line-up of soloists - Kitty Whately mezzo soprano, Robert Murray tenor, and Ashley Riches baritone - the choir told the story of Gerontius ('old man') as he draws his last breaths and then is guided by the Angel to judgement.

The Dream of Gerontius is based on a poem by Cardinal Newman and is Elgar's most famous and beloved choral work. Despite a premiere that did not do it justice, it was later hailed as a success and helped elevate Elgar to the forefront of European composers.

The choir received an excellent review of this concert in MusicOMH and the Ham and High. [Photo: David Winskill]