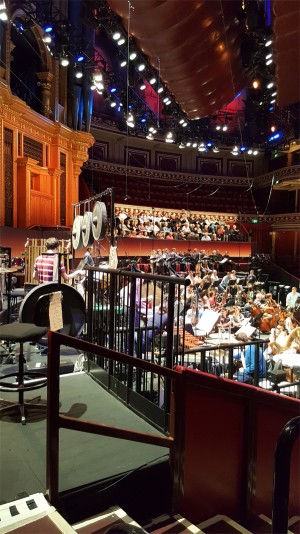 Each year, the transition of summer into autumn is marked by the Last Night of the Proms, the eccentrically patriotic concert in the Royal Albert Hall that traditionally brings the BBC Proms classical music festival to a close.

In recent times, the Last Night at the RAH has been accompanied in neighbouring Hyde Park by an open air concert of rock, pop and light classical music: Proms in the Park. And when our patron Sir Ray Davies was invited to headline this televised extravaganza on 9 September this year, who else would he invite as his backing singers than Crouch End Festival Chorus?

The CEFC singers were thrilled to be performing Kinks' hits with Sir Ray. It was also good to catch up with another performer who is one of the choir’s patrons: renowned tenor Sir Bryn Terfel. And when the time came for the Albert Hall audience to join in with traditional Last Night songs such as Land of Hope and Glory, the Hyde Park performers and crowd were linked in for the rousing singalong too.

The Hyde Park concert required only a fairly small group of singers from the Crouch End Festival Chorus pool, but the choir had been out in force at this summer’s other fantastic Prom experience: BBC Prom 17 on 27 July.

Performing with the BBC Philharmonic Orchestra under the baton of Juanjo Mena, our singers added large choir power to the London premiere of The Immortal, Mark Simpson’s epic oratorio based on Victorian séances.

The spooky 2015 work was well-received in a packed Royal Albert Hall, and was enjoyed at home by listeners to BBC Radio 3. And two months on, our massive shout of “Thanatos!” (death) is still ringing in the ears of all who heard it.