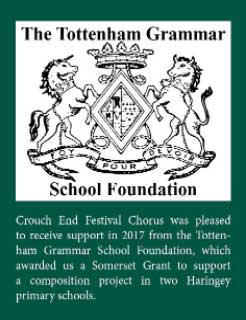 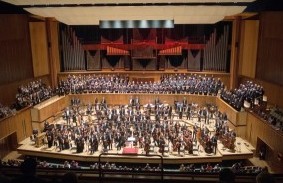 The critics wrestled with their words to describe the scale and power of Prokofiev's Cantata for the Twentieth Anniversary of the October Revolution, performed under the baton of Maestro Vladimir Ashkenazy in Cardiff and London in May.

To stage the Cantata, Crouch End Festival Chorus joined a 150-strong Philharmonia Orchestra, the Philharmonia Voices and a brass band from the Royal Welsh College of Music and Drama.

Critics Paul Corfield Godfrey and Nigel Jarrett welcomed the visit from this rarely-performed work to Cardiff's St David's Hall on 18 May, where it was combined with Prokofiev's Autumnal and Violin Concerto No.1 in D (soloist Pekka Kuusisto).

The singers eagerly embraced the rich Russian vocal style required for the Cantata, which features texts by the pioneers of Soviet communism and tells vividly of the uprising of the oppressed. Godfrey said that the Cardiff audience "were rightly and wildly enthusiastic", adding: "for myself I was delighted to encounter a work such as the Cantata, which I do not expect to hear again in the concert hall during my lifetime."

In the 20 May concert in the Royal Festival Hall, Autumnal was replaced in the programme by Prokofiev's visceral Seven, they are Seven – an atonal choral work based on an ancient Babylonian text and performed in the Russian words of poet Konstantin Belmont. Critic Mark Berry said the piece "received an exhilarating performance under Vladimir Ashkenazy ... joined by the equally fine [tenor soloist] David Butt Philip, Philharmonia Voices, and Crouch End Festival Chorus."

The reprise of the Cantata at the London venue was also a triumph, with critic Nick Breckenfield commenting: "There was a wealth of vivid detail in the story-telling, especially from the sixth section on, with genuine exciting narrative-thrust about how the proletariat hung on to achieve victory, and Ashkenazy teased out the colours to magnificent effect."

Violinist Pekka Kuusisto added to the success of the two concerts, being warmly praised by the critics and receiving adulation from the audience at both halls for his interpretation of the Prokofiev concerto. All in all, these were two spectacular evenings of music under a legendary maestro, and it was a privilege for Crouch End Festival Chorus to be part of them.