I first came across Morricone’s music in 1968 when The Good, the Bad and the Ugly reached No 1 in the UK singles' charts.  Given the riches of music in the late 60s it was an amazing achievement. In the mid 70s my first girlfriend, Antonella from Italy, played Morricone’s film music constantly on her cassette player, and I was struck even then by the quirkiness and variety of his writing, very different from the usual Hollywood studio orchestra sound.

In the late 90s we recorded many of Morricone’s film tracks, which included chorus, for Silva Screen and it must have been these which alerted both Morricone and the Barbican promoters to approach us to perform in his first ever UK pair of concerts in March 2001. We arrived at Fortismere School to rehearse just ourselves before the Maestro arrived to take over.  The feeling of excitement as he stepped up on to the podium was something I will never forget.

The concert itself was different from all which followed as it was unplugged and so it was possible to hear the intricacies of his glorious music unpolluted by amplification. The audience represented the who’s who of UK music – such was the occasion.  The first half comprised Morricone’s ‘serious’ classical compositions.  The audience sat quietly and respectfully but in truth that was not what they came to hear.  As the second half began with the introduction to The Good, the Bad and the Ugly, you could feel the audience twitching and shaking with excitement. The reaction was utterly extraordinary.

We obviously loved working with him but also it seemed that the feeling was mutual. Next up for us was his 75th birthday concert at the Royal Albert Hall in November 2003. In the audience that night was Noel Gallagher who decided he wanted to work with ‘that choir’ and there followed many years of collaboration, first with Oasis and then Noel as a solo artist.

A pair of concerts in the Hammersmith Apollo was scheduled for July 2005 but this was cancelled, which turned out to be fortuitous as the temperature hit 36 degrees Celsius on the day of the cancelled concert.  The rescheduled concerts took place in December 2006.  In terms of the quality of amplified sound, these were the best we ever did. I remember very clearly turning up very early at our rehearsal venue and waited for someone else to arrive.  That person was Morricone himself and we were alone in the hall…. We smiled, hugged and then managed a conversation in broken English and shattered Italian.  I always suspected that Morricone’s English was better than he let on...

If anything ever represented the varied life of Crouch End Festival Chorus it was in April 2010 where we sang with Morricone at the Royal Albert Hall on the Saturday and then performed Janacek and Beethoven at the Barbican the following night.  This clip from the audience captures the thrill of that evening with the Maestro.

In December 2015, a small group of singers took part in a filmed concert at Abbey Road Studios to celebrate Morricone’s new film score for The Hateful Eight. By this time we were all aware that, as Morricone was in his late 80’s, this might be the last time… 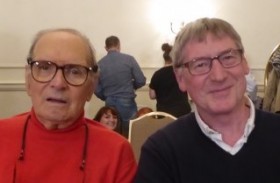 Fortunately this was not the case and our next concert with Morricone was on 23 June 2016 at Blenheim Palace.  Each time we worked with him, there would almost always be something new in the programme which meant that every concert was unique.  He looked very frail that day but he was back to full health for his final UK appearance with us in London’s O2 arena in November 2018.  In many ways this concert was every bit as special as the first, as it bookended his UK visits.

We assumed this would be the last and yet, it always felt possible that something might come about…. until the sad news of his passing.

Of all our glorious musical experiences this must rank at the top. How blessed we are to hold such memories.  Thank you, Ennio. You live on with your music and in our hearts.