Crouch End Festival Chorus have been preparing for Christmas 2019 with shows involving two completely different singing partners -- Halloween monsters and some of the world’s most famous choristers. 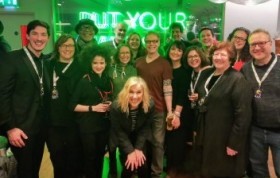 The choir joined composer and singer Danny Elfman and the London Philharmonic Orchestra in two showings of Tim Burton’s film The Nightmare Before Christmas accompanied by Elfman’s music and songs at the SSE Wembley Arena on 4 and 5 December.

The show, which also included actress Catherine O’Hara and singer Ken Page, featured violinist Sandy Cameron who will be on stage with the choir again in April 2020 when Elfman’s Violin Concerto receives its London premiere at the Royal Festival Hall.

The chorus then prepared to link up with world-renowned Choir of King’s College, Cambridge for a Christmas Concert at London’s Barbican on 16 December, the third year running that the choir has joined the choristers for the festive season.

“It is a busy time and the commitment of the singers has been superb, “ said Music Director David Temple. “The Elfman and King’s College concerts are so different but the singers have shown their versatility by working hard for both at the same time.”