Crouch End Festival Chorus has won huge praise for its wide range of dramatic singing styles in an historic recording of Hubert Parry's Judith released at the end of February 2020. 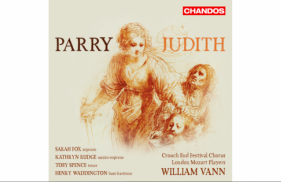 In April 2019 the choir sang to much acclaim in the first London performance of the neglected oratorio since 1889 under the baton of British conductor William Vann.

The first ever recording of the work by Chandos Records under Vann also features Sarah Fox (soprano), Toby Spence (tenor), Henry Waddington Bass (bass-baritone), and the London Mozart Players. The first reviews of the recording have been full of admiration.

"Although it was a public success at its 1888 premiere, neglect soon followed for a creation too long and undramatic to squeeze the full juice from a biblical tale starting with the god Moloch, devourer of children, and ending with Judith beheading Holofernes," said Geoff Brown in The Times.

"However, you don’t have to be Parry’s champion Prince Charles to feel a thrill as the soprano Sarah Fox rings out as Judith, the Crouch Enders exult, the tenor Toby Spence sonorously conveys the vacillating king Manasseh and Parry creates sequences of stirring clamour. Give it a spin. "

Katherine Cooper added in her review for Presto Classical recording of the week: "Crouch End Festival Chorus have a whale of a time baying for blood to appease their pagan god Moloch in Act One (shades of Mendelssohn’s worshippers of Baal), and are equally impassioned in the wonderful lament for the dispossessed Jews of Jerusalem which opens Act Two and in their brief costume-change as invading Assyrians. "

The recording, which was made just a few weeks after the concert in north London, is available from the Crouch End Festival Chorus music shop and from Chandos.