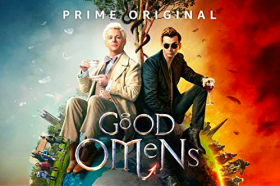 After singing the soundtrack for Rocketman, expected to be one of the biggest films of the year, Crouch End Festival Chorus is involved in the most hotly anticipated TV show of 2019 – Good Omens.

At the end of a month when the movie about Elton John has hit cinemas across the world to much acclaim, the new TV series starring David Tennant and Michael Sheen drops on Amazon Prime Video on Friday 31 May.

Good Omens, co-produced by BBC Studios, is based upon a cult novel of the same name written by Terry Pratchett and Neil Gaiman. It involves a demon (Tennant) and an angel (Sheen) joining up to try to stop the end of the world and will be shown on BBC after the release on Amazon Prime.

Gaiman attended some of the recordings which were overseen by score composer David G. Arnold, best known for writing the music for five James Bond films.

Arnold's music combines pure angelic sounds with low, modulated and distorted notes to create a "soundworld of heaven and hell" using musical instructions to the singers ranging from "breathy" and "lyrical" to "nasty through teeth" and "seasick."

Music Director David Temple conducted the choir in four recording sessions for the soundtrack at London’s Air Studios between August and November 2018.

“It was great to be involved with a superb team for this soundtrack and we are looking forward to it hitting the TV screens,“ Temple said. “We are in the middle of intensive rehearsals for our next concert next month but I know the singers will make time amidst the Vaughan Williams and Bruckner to watch all six episodes of Good Omens straight away.”

Singing with Ennio Morricone at the O2