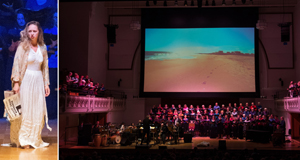 The world premiere of Lansky: The Mob’s Money Man was a highlight of 2015 for Crouch End Festival Chorus, so we were delighted to join composer Roland Perrin and The Blue Planet Orchestra for a reprise at London’s Cadogan Hall this summer. The work charts the eventful life of New York mobster Meyer Lansky, using jazz, klezmer and Latin American music to tell the story.

The CEFC commission was taken up a gear for this performance, with acted scenes and visual projections. And as the UK’s most versatile large choir, the singers were in their element, getting into the groove with the virtuoso jazz instrumentalists. It was also pleasing to welcome back charismatic jazz singer Rachel Sutton (pictured) and renowned actor Allan Corduner, whose rich speaking voice provided the links between the scenes.

Roland Perrin has called his composition a choral jazz concert drama but on 1st July an impressed audience member said afterwards: "You should have called it an opera – it really was an opera!" Whatever you call it, Lansky: The Mob’s Money Man is a great night out that deserves many more performances.