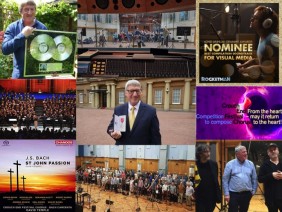 The choir has also just launched a new Young Conductors Mentoring Scheme to help develop the stars of the future.  Here, David looks back at a decade of diversification and a glorious year.

“All years are special for the choir but the two years which started and finished the decade were particularly fruitful, exciting and significant.

It was a great way to start the decade and 2019 has also been a year of equally glorious musical moments.

In January and March we recorded backing tracks for the Elton John biopic Rocketman in Air Studios produced by Giles Martin with composer Matthew Margeson and director Dexter Fletcher in attendance. It was one of the most enjoyable sessions that we have ever had and attending the UK premiere in Leicester Square and then a choir viewing in Muswell Hill were true highlights of the year.

In February Elgar’s The Dream of Gerontius in London received a rapturous audience reaction and excellent reviews, as did Berlioz’s Beatrice and Benedict in Manchester’s Bridgewater Hall with the BBC Philharmonic Orchestra. This was the choir’s first appearance in this glorious concert hall and we are going back there in 2020.

In April we performed Handel’s Messiah and took part in a rare concert and inaugural recording of Parry’s Judith which is expected to be released in 2020.  In the same month we also had a hugely successful concert with Classic FM.

In May, Good Omens, an Amazon Prime series featuring the music of David Arnold, was released with the choir featuring prominently on the soundtrack. The series is going to be shown on the BBC from 15 January 2020. The chorus also recorded The Crown for Netflix. It is so thrilling for us to be involved in such brilliant series.

June featured a wonderful concert in St Andrew Holborn including works by Pēteris Vasks and Vaughan Williams as well as another visit to Abbey Road studios to record for Audionetwork as part of their classical music catalogue of library music.

We were in the studios again in July, putting down a soundtrack for the 2020 film Six Minutes to Midnight using six of our sopranos in Air Studios followed by our full symphonic choir making a major recording of Arnold Rosner’s Requiem in Abbey Road with the London Philharmonic Orchestra. This unknown masterpiece is also due for release in 2020 and should enhance the reputation of this unjustly neglected composer.

In August we launched the Young Conductors Mentoring Scheme with winning applicants, Mariana Rosas and Matthew Quinn.  I have been working with them at rehearsals and concerts for the entire season and it has been very rewarding, helping to develop such talented conductors.

In September we were part of a major choral BBC Prom at the Royal Albert Hall, singing John Luther Adams’s In the Name of the Earth.

In October the choir performed Beethoven’s Missa Solemnis and Ian Lawson’s From the heart, the winning entry of a our composition competition, and took part in the 75th birthday celebrations of composer Sir Karl Jenkins at the Royal Albert Hall and a concert with Italian tenor Andrea Bocelli in Birmingham.  Both of these events have led to further invitations in 2020.

In November Crouch End Festival Chorus performed at the Royal Festival Hall with the Philharmonia Orchestra – Walton’s score of Henry V in the film by Laurence Olivier.

CEFC is now the ‘go to’ choir for ‘live’ performances of film soundtracks. The year ended  with two performances at Wembley of Danny Elfman’s score The Nightmare Before Christmas, a triumphant concert with Kings College Cambridge and their new Director of Music, Daniel Hyde and our own Christmas concert in the beautiful St Michael’s Church, Highgate.

Crouch End Festival Chorus has become the most eclectic, versatile and sought-after symphonic choir in the UK.  We have plenty in the diary for 2020. Please take a look at the website to see details of our future concerts and see how you can join us or follow our activities on social media. Here’s to another wonderful decade of singing. “

The choir that does it all