Crouch End Festival Chorus is delighted to welcome one of its own sopranos – Dame Liz Forgan – into the prestigious club of choir patrons.

Dame Liz is an influential figure in the media and arts world as a former Guardian journalist and founding commissioning editor of Channel Four and former chair of the Arts Council. 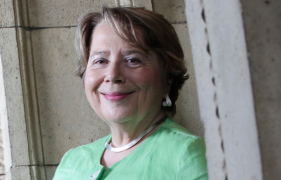 Dame Liz, 75, learned to love music from an early age.

“Everyone in our house sang,” she said. “Classical music went in with mother’s milk. My Edwardian grandparents used to be asked to take their music to sing at parties. All my schools did classical music and made everyone sing whether it was Bach or Gilbert and Sullivan. “

She has special memories of rehearsing Stravinsky’s Symphony of Psalmswhich features in the choir’s next concert on Sunday 2 February at the Queen Elizabeth Hall in London.

“I was with the English Bach Festival Chorus, during which I sang the Symphony of Psalms twice – once for Stravinsky and once for a planned disc with Leonard Bernstein,” she said.

“The pity of it is that I was so overawed by Stravinsky that I can’t remember a word he said about the piece.”