Crouch End Festival Chorus feature on the soundtrack of the latest series of Netflix’s popular The Crown, a big budget drama on the British royal family released in November 2019. 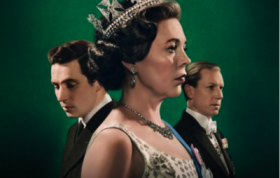 The choir recorded the music for several scenes of the series at Air Studios in north London in May 2019, including scenes for a political meeting and the funeral of the Aberfan disaster.

Olivia Colman succeeds Claire Foy as Queen Elizabeth II in season three of Netflix’s royal biopic. The ten episodes were released on Sunday 17th November.  Unusually the choir were able to see some of the scenes while they were recording them at Air Studios in Hampstead.

“It has been a big year for us for soundtracks with our appearance on the Rocketman movie and the Good Omens TV series and it’s magnificent to be part of such a prestigious series such as The Crown,” music director David Temple said. “I know our singers enjoy these recording sessions. On this soundtrack we had to sing in a variety of different styles and be very versatile.”

The main theme of The Crown was composed by Hans Zimmer, who is one of the patrons of the choir.  The soundtrack for the new series was written by composer Martin Phipps.

The choir that does it all