A new Christmas album featuring Crouch End Festival Chorus has been released on November 26 2021 with an eclectic mixture of modern and traditional songs and carols. 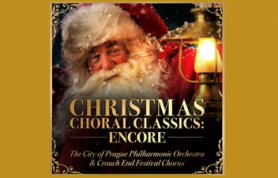 Christmas Choral Classics: Encore is the second festive album that the choir has recorded with the City of Prague Philharmonic for the London-based Silva Screen record company in the last six years.

The choir sang on the double CD The Greatest Christmas Choral Classics in 2015. There are 19 tracks from the chorus and orchestra on the latest recording.

The album, recorded at Abbey Road Studios in September 2021, features Leonard Cohen’s song Hallelujah, The Pogues’ Fairytale of New York, and Amazing Grace as well as special arrangements of traditional carols such as We Three Kings, Sussex Carol and O Little Town of Bethlehem.

“It was great for us to get back into the recording studio again after the pandemic,” Music Director David Temple said. “We love working with Silva Screen and we enjoyed two full days of great recording at Abbey Road. It's shows off the choir's versatility and I'm delighted with it.”

The album is available for purchase or download via our Music Shop and all usual digital streaming services.

Little Drummer Boy, from one of the choir's previous Christmas Choral Classics albums is featured in the new Disney+ series Hawkeye which aired from yesterday.