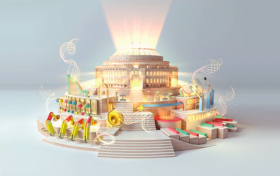 Crouch End Festival Chorus is to sing in a large-scale musical spectacle at the BBC Proms in September which one critic already predicts will definitely be “special”.

The chorus will be one of eight choirs – more than 600 singers – placed around the Royal Albert Hall to perform the European premiere of In the Name of the Earth by Pulitzer Prize-winning American composer John Luther Adams on Sunday 8 September 2019.

“‘The Sunday-morning performance of John Luther Adams’s huge choral piece In the Name of the Earth will surely be special,” The Guardian’s Andrew Clements wrote after the Proms launch on April 17.

Temple, who joins forces with Neville Creed, Neil Ferris and Simon Halsey as the leading conductors in the project, has prepared the choir for seven appearances at the BBC Proms in the last 10 years.

In the Name of the Earth celebrates the elements in a musical meditation on rivers, lakes, mountains and deserts.

The work was commissioned by the Lincoln Center for the Performing Arts and premiered on August 11 2018.  It was originally due to be performed at New York’s Central Park but rain forced the premiere inside to the Cathedral of St John the Divine.  Halsey conducted the New York performance.