Our world premiere of an exciting work by up-and-coming British composer Ryan Latimer together with two classic pieces by Leonard Bernstein was broadcast on BBC Radio 3 on 16 November. 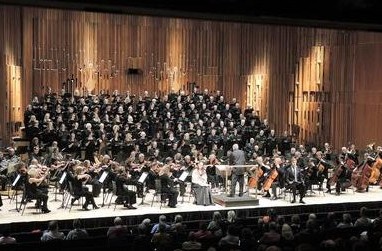 It opened with the BBC Concert Orchestra playing Tchaikovsky Romeo and Juliet Fantasy Overture before the 28-year-old Latimer’s new work was well received in the Barbican Hall.

"With his skill, sense of fun and imagination, he has a promising future ahead of him," Crouch End Festival Chorus Music Director David Temple said. Latimer, a lecturer in music at Birmingham University, tweeted: “Thanks for such a fantastic first performance of Frigates & Folly. A truly memorable and humbling experience all round.“

Joshua Abrams, 12, won much praise for his solo in the second movement of the Chichester Psalms (Adonai Ro-i, Lo Ehsar or the Lord is my Shepherd) before Valeria, Emily, Kieran and Nitai took on the roles of Maria/Rosalia, Anita, Riff and Bernard/Tony respectively in rousing renditions of the popular I Feel Pretty, Jet Song, America and Tonight Ensemble.

The concert was broadcast on Radio 3 on 16 November at 15:30 and is available to listen to on BBC Sounds until 15 December.