Crouch End Festival Chorus was showered with five-star review praise from high-profile critics and musicians for an historic Hubert Parry performance, just three days before a concert of Handel’s Messiah on Saturday 6 April. 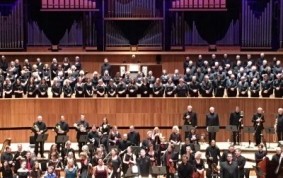 The choir’s singing in the first London performance of Parry’s Judith since 1889 at the Royal Festival Hall under the baton of William Vann was described as “fantastic", “great", and “valiant” by a variety of critics.

“At its heart was a valiant performance from the Crouch End Festival Chorus,” Erica Jeal wrote in the Guardian. “Crisply sung by the Chorus,” Anna Picard added in The Times.

The choir under music director David Temple has a reputation for singing a wide range of works and the Messiah concert will be only the third full performance of Georg Frideric Handel’s popular masterpiece in the 35-year history of the choir.

We will be joined by the Bach Camerata and soloists Jessica Cale, Diana Moore, Sam Furness and Benjamin Bevan plus Peter Jaekel on the organ for the choir’s first Messiah since 2005.

Here are some of the other reviews:

“Vann’s enthusiasm for the piece is obvious. His sensitive direction drew tremendous energy from the Crouch End Festival Chorus who put many of the London’s orchestral choruses to shame with the precision and musicality of their singing. Every word … was crisply articulated, plenty of crunchy consonants supplementing the musical drama.” (theartsdesk.com)

“The Crouch End Festival Chorus grasped every opportunity that Parry gave them, singing with plenty of admirably firm tone and superb commitment. They certainly did not sound as if the choir had never sung the piece before, which is a great credit to them and their chorus master, David Temple. And by the end, it seemed as if they were having the time of their lives." (Composer Robert Hugill in five-star review)

"I was greatly impressed by the singing of the Crouch End Festival Chorus. Numbering about 100, they made a fine showing. From first to last they sang with great commitment and it was evident that they relished the music. The singers demonstrated a very good dynamic range ... [and] gave a fine demonstration of dramatic choral singing, communicating strongly with the audience." (Seen and Heard International)