It was the first UK recording of the work in English for more than 40 years, and it made the top 10 of the official UK classical charts and remained in the top 30 throughout April 2017. 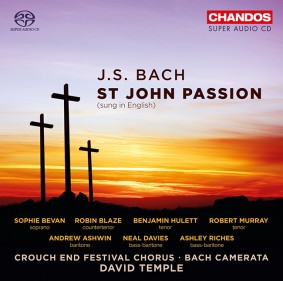 Aided by a sensitive translation by Neil Jenkins, the choir has won much praise for the drama of the story-telling in the recording.

Performed in Baroque pitch with the Bach Camerata and leading British soloists, the CD has received enthusiastic reviews from the critics and public.

The choir gave a live performance of the work on 1 April 2017 at St John's Smith Square in London.

The recording is now available worldwide to purchase as a digital download or CD and you can buy it through our Music Shop.


Here's what the critics and public had to say:

"I must confess that – given a long-held preference for listening to (and performing) works in their original tongue – I was prepared to scoff at such an affront to Bach’s intentions. However, by the end of the opening chorus and the Evangelist’s first gripping appearance I was completely hooked."
Malcolm Riley in Gramophone

"This is one of the most persuasive recordings I’ve ever heard. It’s forceful, passionate, incredibly expressive."
Sarah Walker in Essential Classics, BBC Radio 3

"The obvious competition for this will come from the English Chamber Orchestra's 1971 recording conducted by Benjamin Britten, which is in its own way wonderful, but this one feels more immediate and more involving because of the excellent sound, the clarity of the singing and the consistent beauty of the textures."
Simon Thompson on MusicWeb International

"The Bach Camerata play with idiomatic certainty and utter conviction, the 100-plus voices of the Crouch End Festival Chorus intensely fervent yet exquisitely nuanced. In a word: essential."
Michael Quinn on Classical Ear

"[There's] plenty to recommend a recording ... with a hefty100-plus chorus mustering venom aplenty. The solo line-up is without a weak link."
BBC Music Magazine (**** four stars)

"This Chandos recording [enables] listeners to revisit the work afresh. [It] bears all the best aspects of the tradition of choral society performances in the UK: enthusiastic, upfront singing and an impressive, effusive body of sound from a massed choir."
Curtis Rogers on Classical Source (****four stars)

"This is an outstanding recording in every way. Perfect sonic clarity, soloists with beautiful tone and crystal clear voices and choral work that puts most other recordings to shame. The Crouch End Festival Chorus, 100 strong in this recording, sings as one with a clarity of diction that is barely obtained by choruses a fraction of that size! - Buy this now, for yourselves, for your friends and for strangers!"
A Roth on Amazon.com USA (***** five stars)

With footage from the September 2016 recording sessions at St Jude's, Hampstead Garden Suburb. 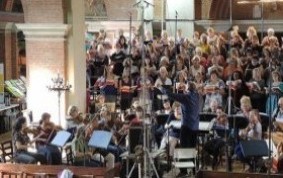