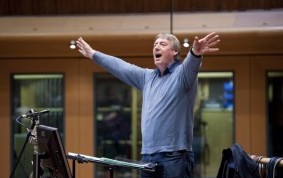 David Temple, who was awarded the MBE in the 2018 New Year’s Honours list for services to music, founded Crouch End Festival Chorus in 1984 with fellow tenor John Gregson.

Since then, his eclectic tastes have shaped the enormously varied work of the choir, making Crouch End Festival Chorus unique in the choral world for its versatility.

David’s recording of Bach’s St John Passion (in English) with CEFC for Chandos Records has received glowing reviews. He also prepared the choir for the 2017 Proms concert with the BBC Philharmonic Orchestra – a performance of Mark Simpson’s The Immortal under Juanjo Mena -- and in May 2018 for two concerts of Prokofiev in Cardiff and London with the Philharmonia Orchestra under Russian-born pianist and conductor Vladimir Ashkenazy.

David has collaborated closely for many years with Sir Ray Davies, conducting the choir on the Pyramid Stage with the former Kinks singer-songwriter at Glastonbury in 2010.

In June 2011, David also directed the choir and the London Philharmonic Orchestra in the final concert of the Ray Davies Meltdown Festival at the Royal Festival Hall. In 2017, he appeared with Sir Ray, the BBC Concert Orchestra and the Chorus at BBC Proms in the Park at Hyde Park.

At the 2008 Electric Proms at the Roundhouse in London, David and the choir performed with Oasis. Subsequently he directed the choir on Noel Gallagher’s first solo album as well as conducting the choir on UK-wide tours in 2012, 2015 and 2016.

David’s highlights with Crouch End Festival Chorus include Mahler’s 8th Symphony to a sell-out Royal Festival Hall and John Adams’ Harmonium at the Barbican in the presence of the composer.

He is also an experienced conductor in the recording studio. Recording work includes music for the BBC TV’s Doctor Who at Air Studios and soundtracks for several films including A Cure for Wellness, Loving Vincent and Rocketman

David’s work as chorus master includes Berlioz’s Grande Messe des Morts with the BBC Symphony Orchestra under François-Xavier Roth. In 2017, he prepared the BBC Symphony Chorus for a concert and recording with Chandos of Bliss’s The Beatitudes under conductor Sir Andrew Davis.

David has also been Music Director of Hertfordshire Chorus since 2000.

His recording of Will Todd’s Ode to a Nightingale and James McCarthy’s Codebreaker with the chorus and the BBC Concert Orchestra has been released on Signum Records, receiving excellent reviews.

Other concert highlights include a critically-acclaimed performance of Elgar’s The Kingdom in St Albans Abbey. David’s commissions with Hertfordshire Chorus include Will Todd’s Mass in Blue, which has received more than 200 performances worldwide. His latest commission was Roland Perrin’s Rio Amazonas which received its premiere in Saffron Hall in July 2017 and was then performed at the London Jazz Festival in November.