Crouch End Festival Chorus is one of Britain’s leading symphonic choirs with a reputation nationally and internationally for its eclectic repertoire.

Based in north London it was founded in 1984 by tenors David Temple and John Gregson to sing Verdi’s Requiem at Hornsey Town Hall as part of the Crouch End Arts Festival.

David has remained as music director ever since while John Gregson is now a patron.

Under David’s leadership and with around 150 singers on our books, we are proud to be known for our wide range of singing skills - from performing and recording traditional classical works to modern and specially-commissioned pieces 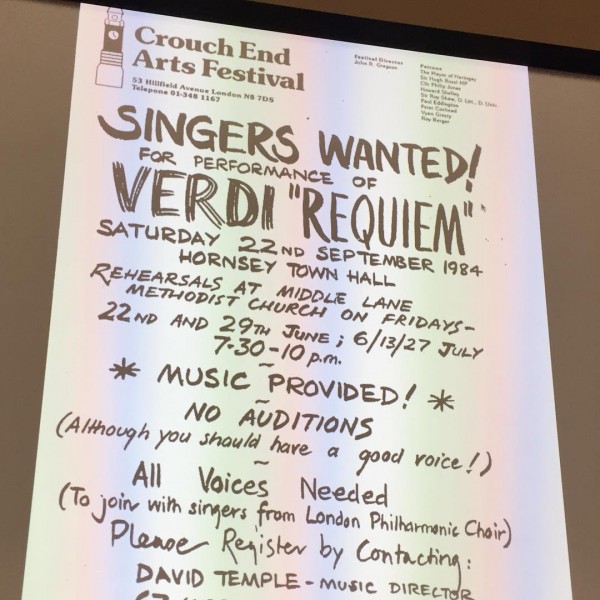 The Chorus promotes its own concerts at major venues such as the Barbican and Royal Festival Hall in London, while also celebrating its local roots with performances in Muswell Hill, Crouch End and Highgate.

The choir has been playing a leading role in classical and popular music for more than three decades.

In 1994 it began cementing its international reputation with the first-ever performance in Poland of Tippett’s A Child of Our Time at the Wratislava Cantans Festival in Wroclaw. Around that time, the chorus was also engaged by Silva Screen Records for the first time and has subsequently appeared on over 100 recordings, leading to work with future patrons, composers Ennio Morricone and Hans Zimmer.

In 1997, the choir reached the Top Ten in the US Billboard Charts with its Cinema Choral Classics CD. Crouch End Festival Chorus sang at the National Maritime Museum to welcome in the new Millennium with celebrated artists including Eurythmics, Bryan Ferry and Lesley Garrett.

Another landmark was the 2001 CEFC Commission and premiere of David Bedford’s The City and the Stars. Based on the novel by Arthur C Clarke the performance featured the 83-year-old Clarke on film, reading a narration between the movements.

The choir has appeared regularly at the BBC Proms since its first appearance in 2001 with the Kirov Orchestra and Valery Gergiev. A particular highlight included Mahler’s Eighth Symphony at the First Night of the Proms in 2010 which was preceded that summer by an appearance with Sir Ray Davies on the Glastonbury Pyramid Stage.

The Chorus is well known for commissioning new works and supports its own activities through an ever increasing recording and external engagements schedule. As well as the many successful recordings of film and rock music, the 2017 recording of Bach’s St John Passion for Chandos Records has been a major triumph.

You can see our full catalogue in our Music Shop and read a full list of our repertoire here.