Crouch End Festival Chorus is one of Britain’s leading symphonic choirs with a reputation nationally and internationally for its eclectic repertoire, innovation and versatility in both the concert hall and recording studio.

Based in north London, the choir was founded in 1984 by David Temple and John Gregson. John is still very much involved as one of our patrons. David has remained as Music Director since the first rehearsal in 1984, and we are delighted that his success and hard work was formally recognised with the award of MBE in the 2018 New Year's Honours for services to music.

Under David’s leadership and with around 150 singers on our books, we are proud to be known for our wide range of singing skills - performing and recording specially commissioned pieces as well as the traditional classical works from the 16th to 21st centuries.

The choir promotes its own concerts at major London venues such as the Barbican Hall and Royal Festival Hall while also celebrating its north London roots with performances in Muswell Hill, Crouch End and Highgate (see Our Programme for future performances.)

We have performed and recorded with some of the biggest names in classical and rock music, including tenor Andrea Bocelli, bass-baritone Sir Bryn Terfel, composers Ennio Morricone and Hans Zimmer and rock stars Sir Ray Davies and Noel Gallagher. 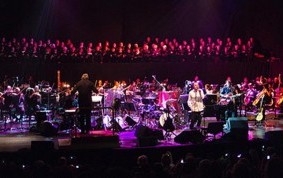 We are also in demand in the studio, recording everything from commercials and film sound tracks to albums with major pop music and classical artists. We regularly take part in the BBC Proms at the Royal Albert Hall and are involved in a wide range of  engagements on television, radio and in the concert hall with other major musical figures.

You can find out what the choir has been doing in News and this season's programme.

Crouch End Festival Chorus is proud to have these distinguished figures as patrons: